Dr. Brett Fitzgerald is an instructor of criminal justice, who earned his undergraduate and graduate degrees from Northeastern State University.

I think the first time I was on this campus, I was probably a 15-year-old debater at Muskogee High School, said Fitzgerald. Northeastern was always on the list. I actually have a Kansas State University college credit, but NSU gave me a scholarship. 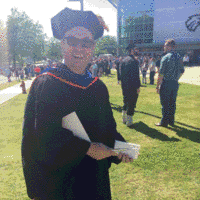 Fitzgerald graduated with a bachelor's degree in criminal justice and speech in 1985. Fitzgerald worked for the Oklahoma Office of Juvenile Affairs for 15 years before deciding to come back for his graduate degree.

Swenson says the smaller campus and community aspects of NSU appealed to her when she transferred.

Fitzgerald said he completed the requirements for his graduate degree at his own pace.

I paid for my master's degree out of my pocket, said Fitzgerald. Not having a lot of money, I took one class at a time. It took me four years to get my graduate degree. I didn't take it for job advancement. I didn't take it because I wanted a different job. I didn't work on it for any other reason other than for myself. So, that allowed me not to be in any hurry.

After completing his master s, Fitzgerald was accepted into the University of Arkansas Fullbright College of Arts and Sciences where he received a doctorate in public policy in 2014. He returned to NSU and became part of the criminal justice faculty in 2010.

They [NSU] saw something that I didn't see, said Fitzgerald. I was literally propped up and given opportunities to present at conferences and the Oklahoma Bar Association.

Teaching at NSU. Fitzgerald said it was the faculty that pushed him to teach at NSU after his graduate college years, including Dr. Frank Zeigler of the Criminal Justice Department and the late Bill Hack.

Fitzgerald said he enjoys the diverse population of students on campus.

I think the quality of students here is better, said Fitzgerald. I like the diversity first of all, one of the things that is not remarkable to me but is notable to me, is that I have as many females in my criminal justice class as I do males. I think we probably have as diverse a population as anybody.

As a faculty member, Fitzgerald believes it is important to have experience and practical knowledge of the subject you're teaching so lessons can be better conveyed to students.

I come from a background where I started out as a paralegal when I graduated. I immediately went to the criminal division of the Oklahoma County Courthouse, worked for the court clerk there and did misdemeanors and felony documents. I was a judge's clerk for a while, a bail bondsman in Norman for a number of years, worked asset recovery for asset investigators, ran a bankruptcy division, worked for Commercial Financing Services, and then went to work as a juvenile probation parole officer. You don't do those things without seeing a few things.

Fitzgerald said as a student, he received help from his professors and peers. His goal as a professor is to aide students in the same way he was aided during his time in school.

I have an obligation to pass it forward, said Fitzgerald. A lot of smart people helped me get my Ph.D., and the only thing that they asked for their assistance and they specifically said this pass it forward. So when I help a student who's working on their master's degree, my expectation is that they learn from me how to help a student, and then they pass that on. It's not just teaching, it's taking somebody and recognizing what they need help with and actually saying I can help you with that, and if you're willing to do it I'll go with you.

One aspect of NSU's master's program that Fitzgerald enjoys is that the university has maintained a tradition of face-to-face classes in both undergraduate and graduate spectrums.

I think we have a great program one of the best, said Fitzgerald. We're hanging on to that traditional, face-to-face in the classroom program, we're nonprofit, we're a great value and have some of the best professors in any program. I'd put our guys and gals up against anybody. The graduate program here in my opinion is growing, the online component is reaching out and we are able to provide a good quality product to a wider audience. As long as we are still a nonprofit and we offer that traditional face-to-face program, we're going to be OK.

Encouraging future students. Fitzgerald advises undergraduate students to work on their written skills to prepare themselves better for graduate school, should they choose to pursue it.

Pay attention to your GPA, said Fitzgerald. Pay attention to your writing, learn how to write well. Work on your writing skills would be the number one piece of advice I would give anyone who is wanting to do post graduate. Nothing happens until you write it down. You don't really learn to write very well until you get into graduate school, and then you must write well.

Fitzgerald also encourages students to consider pursuing a master's degree due to the growing competitive climate of career fields.

I think the fact that we have a graduate college here and it provides that opportunity, I think that it's the most important program we have, said Fitzgerald. Your bachelor's degree is only going to get you so far, if society's going to value education it's going to be post graduate in the future, it's heading to the point where it's getting so competitive with your bachelor's degrees that the only way to stay one step ahead of the competition is to have your master's degree.