I found out about NSU back when I was still in high school, said Woodall. I didn't know that they had a graduate program until I was a sophomore in college. One of the faculty members had suggested that I stay and work on my master's degree.

One thing Woodall enjoys about NSU's graduate program is the smaller class size and the friendly atmosphere of their classes. 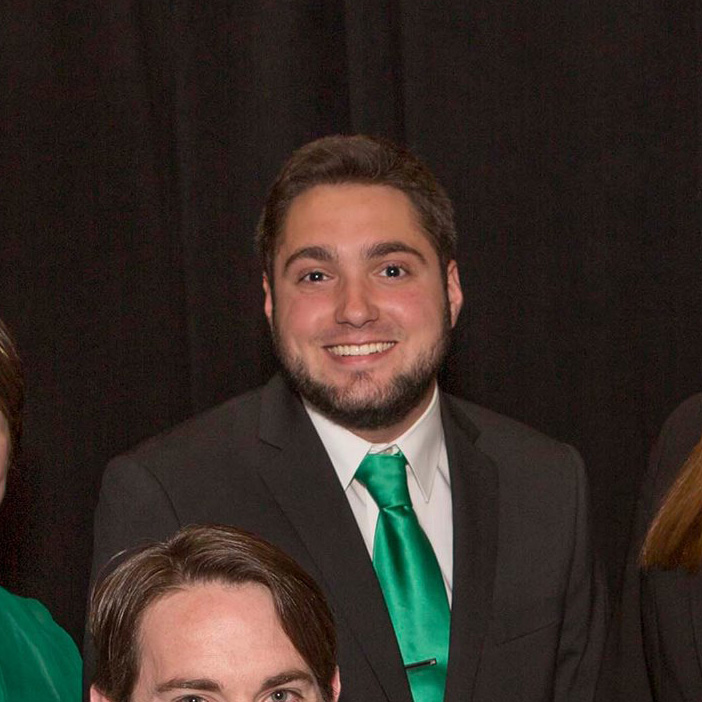 The groups are small so everyone gets plenty of time talking with the instructors. You never have to worry about not getting help, said Woodall. It also makes the program a bit friendlier. I always use to worry about other grad programs being very competitive, and in our program everyone just hangs out. We're all chill with each other. It's really nice to have classmates that I know who are friends as well.

In the communication program, there are two required courses students take, Intro to Graduate Studies and Research Design. The rest of the hours are left for students to fill with classes involving subjects they want to focus on.

I've always been fascinated with debate and public speaking, said Woodall. Whenever I first came to NSU it was to become a debate coach. I ended up staying in the communication program for two reasons: the first was because I heard that's what most debate coaches do. I also discovered the more that I studied topics of communication, the more I could tie it into coaching. They say you can tie just about anything into coaching, but I love communication strategy because you get to learn a little bit of everything, but you also get to refine public speaking at its core.

Woodall also assisted the NSU speech and debate team, and helped them practice for tournaments.

I got to work mostly with the NSU speech and debate team, said Woodall. Even though it's never been an official role, I've always acted as an assistant coach or volunteer for the team whenever we had time. I'd travel with the them to tournaments, I'd go to practices, I'd tutor the freshmen, give critiques for the students to help them get ready for competition. That's not an internship per se, but it's definitely first-hand experience and I'm grateful for it.

Woodall also has experience working as a graduate assistant for the communication department, and strongly recommends any future graduate student to pursue an assistantship of some kind if possible.

Having a graduate assistantship is really valuable if you plan on going into teaching or you're thinking about going into teaching, said Woodall. If you can get a graduate teaching assistantship to teach a course for the university, it gives you a real chance to learn what teaching is really about. I thought I knew a lot about teaching before I started my master's program, before I started teaching. Then whenever I got in front of the class I was like, Woah this is more different than I ever thought it would be. It was really rewarding because I got to learn a lot more about what I want to be as a teacher, what my students need from me. It honestly beats almost any organization.

It helps you feel connected, said Woodall. In college there are a lot of times where you can feel like you're by yourself, work can bog you down, or being away from home and your family can be draining. Being in an organization gives you the opportunity to remember you are not by yourself, there are people that are on campus that are like you or think like you, and can be your home away from home. That's what my fraternity ended up being for me. Even if it's a lasting friendship, or an opportunity for a career in the future, there's so many different kinds of connections and relationships that you can build from getting involved, and all of them can be found in organizations.

Look into scholarship opportunities, said Woodall. See if there are teaching assistantships available, that's why I was able to get my master's degree. See if there's financial aid available beyond loans and grants. A lot of departments offer resources that students don't really know about because they never know to ask for them.

Woodall also advises students to not take on more than they need to during graduate school.

Woodall's favorite part of graduate college so far has been the professors in the communication department.

I love all of my professors, said Woodall. I remember back in high school, every year I had a teacher that I didn't like. It would just be someone I didn't connect with, and I always kind of disliked that about high school. The fun thing about NSU, or at least about my department, is that I love every single one of my professors. I have a different approach to how I go into each classroom, with each professor I have what I like to think is a meaningful relationship. Each of them picks the topics for their classes so I always get to go in kind of giddy, knowing professors are excited to teach what they're about to teach, because the grad classes are the ones that get real deep.